PS4 Puts the Parents Back in Control

The days of trying to pull your kids away from the Playstation are over, as of the software update 5.5 released on 8th March 2018. The parents have won. Obviously.

I remember my childhood being a battlefield of gaming. Constantly bartering for more time to play on the Playstation, covering an age restriction symbol with my thumb when I asked for a game to binge even though my “eyes will go square” while I gradually lose feeling in my legs from sitting cross-legged on the floor. I’ve often thought “I wish I was born later so I could spend my gaming years playing insanely good VR games and not just watch their release when I’m expected to pay for them myself and I’m just too broke”.

Well, not anymore. It sucks to be a millennial right now. System Software update 5.5 has a “Play Time Management” feature, which extends the parents’ control over what their children do. They can put a limit on the age restriction of games played, they can limit the amount of money spent on the store, and most powerful of all – they can control how long their children can play for and even which times and days they can play on. They can schedule non-negotiable gaming sessions. Technically this should have always been a possibility given that children should listen to their parents and nothing should change, except now it is incredibly difficult for the child to resist (nothing can’t be hacked and where there’s a will there’s a way).

This can be managed either directly from the family manager’s account on the PS4 console, or on a PC or mobile device via the web portal. 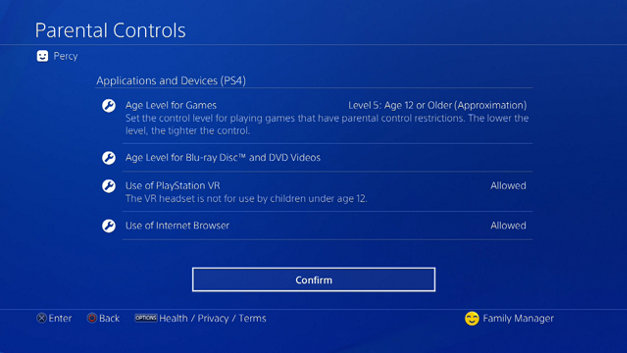 You can find a full guide on how to set this up here.

On behalf of the entire immature gaming community I have to say; “no fair. You cheated.”