New Horizons blasted off in January 2006, with speeds faster than 36,000 miles per hour. The spacecraft passed the Moon after just nine hours and reached Jupiter the following year. It took only three minutes to cross the diameter of Pluto.

The first images beamed back show that, at 2,370km (1,473 miles) in diameter, Pluto is slightly larger than previously believed. This makes Pluto the largest dwarf planet in the solar system. 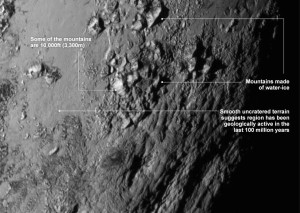 Nasa mission scientists have started giving unofficial names to some of the features found on Pluto. A dark patch near the south pole, initially called the whale, is being referred to as Cthulhu, after the octopus-dragon hybrid deity featured in one of HP Lovecraft’s stories. Other patches have been named Meng-p’o, after the Buddhist goddess of forgetfulness, and Balrog – a menacing creature featured in JRR Tolkien’s The Lord of the Rings. For the names to become official, though, they would need to be approved by the International Astronomical Union (IAU).

The mission is now heading onwards into the Kuiper belt where it will observe one or two of the ancient icy objects in the vast region. Potential Kuiper belt objects that it might visit include Quaoar, Eris, Makemake, Haumea and Sedna. In coming months, scientists will decide the spacecraft’s next flyby target and send signals from Earth to New Horizons to thrust its rockets to tweak its trajectory.